skip to main | skip to sidebar

Well as I sit here and I am watching Kristen and 2 of her friends play Rock Band on Nate's wii, I think that Nate's 23rd birthday has come and gone and I didn't even blog about it!!! So here goes nothing!!!

23 Things About My Nate:
Well those are just a few things about Nate for all of you that don't know him. He is a keeper. I love him. And I am happy with where my life is and it just keeps getting better!

Well Laurie and Dad made it to the Philippines and successfully met up with Nana and Papa. =) Me and Louise talked to them yesterday morning about 11 from Manila and we called mom and put her on speaker phone so we could all talk...it was a little loud for my office but luckily all the visitors were out on tour! But last night while we were bowling with the young professionals from church she sent me and email telling me to get on Skype but me and Louise couldn't manage to get it to come up on the wireless. So last night I kept my work phone on so when she sent me an email it would wake me up and I could just roll over and flip open the computer and talk to her and dad. Well at about 3:55 this morning it went off and I rolled over and I think dad was shocked that I was awake and calling but I just wanted to make sure I got to talk to them! It was so good to be able to talk to Daddy, Nana and Papa. Laurie was in the shower so I will be talking to her later this afternoon. And I think Daddy and Nana and Papa were hungry and wanted to go eat so they didn't stay on the phone or Skype long with me. :) But I am glad everything is going so well for them!! Please continue to keep them in your prayers!!

YAY for the *SNOW DAY* !! Sunday was probably one of the most fun days I have had in a long time!! It was wrapping up a jamboree weekend at Faulkner and one of my very best friends, Seth had been in town all weekend!! (Even though I am just now realizing I didn't even get a picture with him!!!! I am such a bad friend sometimes!! But he knows I love him!!) But Laurie woke me up Sunday morning so we could play in the snow...well 1st thing in the morning I was less than enthusiastic and I apologize 15 million times over for not getting out there and playing with you Laurie...but we would not have taken pictures...too early for that!! =) But you know I love you! And I really am sorry...but moving on.

So after she woke me up and I crawled back in bed after seeing it, I called Nathan to wake him up to look at it...he was like me less than enthusiastic but I couldn't blame him...so he went back to sleep too. After I called him I called Seth and told him to look out his hotel door and this was his exact expression "OH MY ITS SNOWING IN MONTGOMERY!!!". It was great! I loved it!! After I was done making the phone calls I went ahead and got up and got dressed for church. I went and got Nathan and the whole way to his house I just enjoyed viewing all the snow everywhere!! It was crazy to be driving down I-85 and see snow covering everything! It was GREAT!!

After church got out Me, Laurie, Louise, Dirt, Nathan, Rachael, Seth, and Kristen all went to Louise and Dirt's to hang out until Walker, Kristen and Samantha got out of late service. Which meant photo session with everyone at Louise's house!! =) Below are some of the pics I snapped! I wish I had gotten one of Louise and Seth having a snowball fight running around Dirt's truck! It was hilarious!! 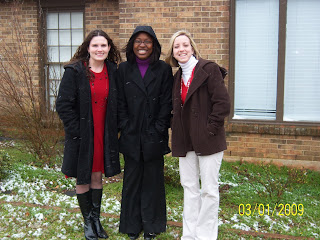 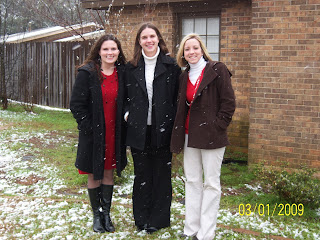 Kristen peeking from inside...she wasn't so much into the playing in the snow like we were...but we finally got her out after some coaxing! =) 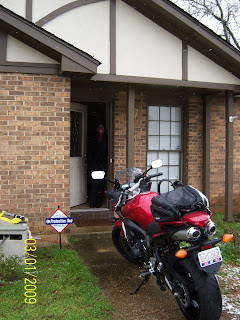 Me and Nate take 1 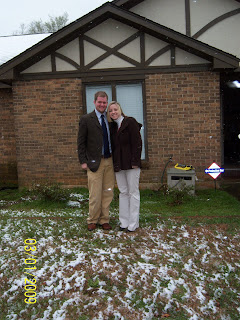 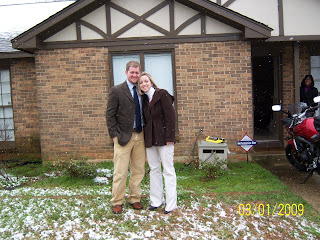 Snow doesn't stop Titus from getting busy...and by the way he loved the snow! Check Louise's blog for pictures of him!! (Hopefully she's posted them by now! =)) 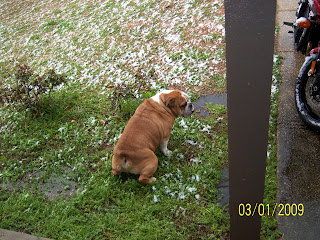 Well yesterday was Laurie's big day! But lets back track to Sunday...It Snowed YAY!! It was exciting! And Laurie was so so excited!! She came home, woke me up and I walked outside and then went right back inside and got back in bed...that was NOT how she had envisioned the morning going at all!! In fact she envisioned it going she would pick me up and we would go over to Louise's and we would all play in it together...No didn't happen! 1st thing that started the day off way wrong...I know I really should've given her more but I really was exhausted from working all weekend and not getting a lot of sleep...I know still not a good excuse!

Well all last week she was avoiding having to drink the "throw up mix" as she would call it. Well Sunday afternoon came and it was time for her to start drinking it. She was ill and irritated bc she had not been able to eat since midnight the night before she started the liquid grossness and couldn't eat again until Tuesday afternoon/night...so yes that is 3 whole days on a clear liquid diet...which if you know Laurie...well if yo know any of the 3 of the Walker girls we can hold our own on food! :) (Ask Dirt...I think he really got a wake up marrying into our family!) So needless to say she was miserable! Well after church we all went and took pictures in the snow and then Laurie went home when we left to go eat. After lunch Nathan and I went to his house, got his Wii and went to the house. I walked back to Laurie's room and she was already in tears and she hadn't even started drinking the liquid! I was so sad for her...but I let her cry for a few minutes and she was upset bc her universal remote wasn't working. So I sent Nathan to the store to get a new remote. He came back and set it up for us so we could watch all the movies we wanted in her room. ***Side note here...Nathan was such a trooper! He stayed in the other room the whole day and played wii and took a nap so that I could stay back there with Laurie and help her!**

Well the time finally came at 3:30 for her to start drinking the throw up mix....and well she did GREAT!! I was pleasantly surprised that she took it so quickly and without a lot of hesitation! (I mean granted she fought me for a little bit about it but we compromised at 3:30 that she would start drinking it! She did really good and drank about 3/4 of all the liquid! (Which was a lot better than last time...and she didn't throw up this time or as much this time as she did the last!)

Monday morning finally got here and I got up and went in her room to check on her and she was so cheerful and in such a good mood, I was shock....Last time I had to take her she cried the whole way to the hospital! So this was a pleasant surprise! (Which in her defense..last time the whole appointment was just kinda thrown on her with no time to really prepare! So this time she had a good week to ponder on it!) We got to the hospital at 8 so she could do some extra test before the colonoscopy. Ended up that they could do the test when she went back for the procedure so we just waited an extra hour for her thing...which was pretty fun. Mom and Dad got there about 9 and her appt was at 9:30. About 9:45 she went back!

As soon as she went back mom and I left to go run all of her money errands that had to be done that day! And by the time we went to the school to pick up her paycheck and to all 3 banks when we got back to the hospital she had just went to recovery. Also while we were gone, Keisha, Laurie's best friend from work, showed up to sit and wait. (She was the one that went with me last time when I had to take her.) She was great! I was so glad she was there...and Laurie doesn't even hardly remember her being there...and she was there all day long...from the hospital and then came to the house for about 4 hours after the hospital!

When she got out of the procedure and went into recovery she was a bit emotional! Which is nothing new but this time she was jerking alot and that was not normal. I look at the nurse and I could tell by their look of surprise this was not supposed to be happening. So they asked us to please go back out into the waiting room while they worked on her. She was back there for about 2 hours and finally we got to go back to see her and get her ready for discharging. So we finally got her out about 1:30 pm. (Yes we were there at 8am :))

We got home and put her in the bed and had some fun conversations that she does not remember and gave her some Gatorade and some chicken broth and she was out til the Bachelor last night and I woke her up to come in the living room to watch with me, Leslie and Nathan...and well see my 1st blog today to see how I felt about the Bachelor!!!

I am so glad Laurie is feeling better and we are celebrating eating at Jason's deli as soon as she gets done with the dr. this afternoon at 3:30. :) Thanks for all the prayers and everyone that has checked on her!! Its greatly appreciated!!

So I am officially over stinkin Jason Meznick...I just am so mad that he did that to Melissa and in front of the WHOLE STINKIN WORLD!!! And then his reasoning for doing that was because he had agreed that his relationship would be in front of the camera so he had to do that in front of the camera!! WELL WHY THE CRAP DID ALL THE OTHER FAILED BACHELOR COUPLES BREAK UP OFF CAMERA?!?!? AND REALLY MELISSA WAS SO RIGHT THAT HE DIDNT WANT TO MAKE IT WORK WITH HER...AND I WAS GLAD SHE LEFT WITH CLASS!! (If you can't tell it really made me mad!!!) And molly, well she is an idiot and should have left him on his butt with no one...she is just a poor man's Melissa!!! (That is a direct quote from Wedding Planner except its a poor man's mary in the movie!! =) I am a nerd I know!!) Well I just needed to vent about that for a minute and I can not wait to see what tonight's After the Rose Part 2 is about! I am sure its about stupid little Molly and Jason's relationship!! Ridiculous!!!

Leigh
I am 29 yrs old. I live and work in Montgomery, AL. I love my job at Faulkner and enjoy the excitement that it comes with everyday!! I have 2 sisters both which live here in Montgomery. I am married to a wonderful guy, Nathan Woodring and enjoy spending a majority of my time with him!! I have one sweet nephew and two sweet nieces they are the lights of our lives! All in all God is good and has blessed me above and beyond!