skip to main | skip to sidebar

Yep, today is the actual day I get my braces finally. After having 4 teeth pulled, and well 2 of them being the most unpleasant experience of my life to date, I am getting my braces put on today. Please do not expect before and after pictures right now. I have no desire to take a picture of what my teeth look like, for those of you that don't know me very well, I will admit I am a little vain and I VERY self conscious of my teeth. But I am working on that because whether people are just being nice and lying most people say they have never noticed my teeth. But I on the other hand have and have for the longest time. Now, I guess being an adult and being able to provide for myself I am taking the plunge for braces! So wish me good luck and I REALLY hope I don't look all crazy with braces, even though I just know I am going too! Thanks in advance!

July 4th and Such!

Well July is here....all 4 of the teeth that had to be pulled in my mouth are pulled and I am happy to report I am feeling good! :) July 14th I have my braces put on and I am nervous (I know Louise what am I not nervous about these days!?! :)) about that! That weekend is not only my quarter of a century birthday but it's Laurie's 10 year anniversary of her 20th Birthday and Louise, Michelle and I have planned a weekend of fun for her!! SO I can not let my teeth get in the way of all that fun! :) So that is the latest on the teeth situation!

This past weekend was 4th of July and I can honestly say it was the best 4th of July ever! We had so much food and so much fun!!! The party consisted of the following people: Laurie, Nathan, Mr. Terry, Mrs. Jacki, Taylor Lane, Justin, Michelle, Morgan, Kristen McCants, Louise (And Baby Ellie :)), Dustin, Kesia, Steve, and Devin. We had a full house and we loved every minute of it! Laurie and I, or should I say Laurie woke up first and quietly came in and woke me up saying this was going to be the best day of the year....and SHE WAS RIGHT!! We both got up and got ready and she started cooking while i was in the shower and after that we loaded up and headed to get Morgan so she could run some last minute errands with us and let Michelle clean, cook and get ready. So we went to Old Navy and bought the party favors for the girls :), and then to winn dixie to get a few things we had forgotten!
After running our errands we got back to the house and my friend April was waiting at the house to visit with me for a couple hours and eat! It was so nice to be able to visit with her and catch up! She is a really great friend and she always brings back good memories and I love her life stories! :) Then Nate came over with his parents and brought the grill and they got everything set up and ready. It was the beginning of a great day! We proceeded to make most of the following stuff in the picture! It was so so so good and so much fun!! Again like I stated before it was the best 4th I can remember! :) Even if we did miss the fireworks bc the waitress at O'Charley's was SLOW AS MOLASSES! But we proceeded to have our own fireworks with some sparklers! :)
This next weekend will be fun too! It is Louise's 1st baby shower! We are excited and look forward to her having MANY MANY MORE! :) 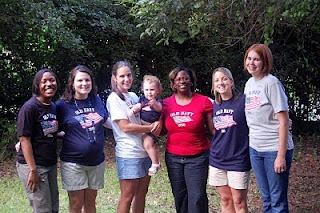 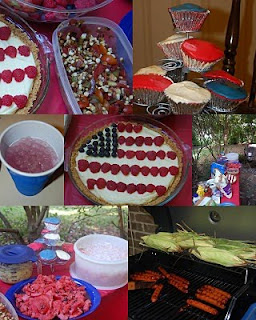 Leigh
I am 29 yrs old. I live and work in Montgomery, AL. I love my job at Faulkner and enjoy the excitement that it comes with everyday!! I have 2 sisters both which live here in Montgomery. I am married to a wonderful guy, Nathan Woodring and enjoy spending a majority of my time with him!! I have one sweet nephew and two sweet nieces they are the lights of our lives! All in all God is good and has blessed me above and beyond!